This is brilliantly succinct:

“But we are shifting, too, from a culture of scarcity to one of abundance. That is the essence of the Google worldview: managing abundance.”

To the further point, collaborative creativity is in a different class  – it’s a different animal – than that of the individual. This is not a value statement – it’s not one better than the other, but it is different. 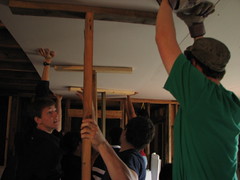 Another e.g., Pete Townshend has a few “Scoop” records that are basically demo tapes of the songs he wrote and then presented to his band (The Who). Pete had brilliantly-talented collaborators to complete the songs, but the core – The Idea – for the most part was solidly his. (The “exception” being Keith Moon, virtuoso drummer, who expanded the cores in directions so completely unforeseen that Scoop demos rarely had drum tracks at all.)

Ideas shared before they’re fully-formed become Different from the original Idea: when the germ is presented as Germ, it develops differently – Sometimes better; always different.

Collaborations start with an idea. A young, solid idea needs germination. That’s best presented, generally, in a small, controlled environment. (e.g. one woman writes the novel, seeing it through the completion of Draft 1).

Even ideas’ first forays into collaborative areas will change them – that’s not bad; just different. Collaboration can be from the germ stage or from later points.

Most likely, fewer than 81% of the world can originate, germinate ideas which are attractive beyond what they themselves would have interest.  Realizing those and publicizing those ideas is the ability we now possess in a way unimaginable just several years ago: finding an interested audience, team members or investors who share your vision (some or all of it) and collaborating with them all is much simpler and more effective than ever before.

Abundant tools – and savings of time (we can work, e.g., at the same time or completely synchronously) exist in such a brilliant way today and that simply has never existed before just a few years ago. And they’ll be even more widespread and powerful in another few years.

Not everyone’s Townshend. Many have ideas as seeds that need collaborative input before they’re fully-formed enough to execute. These are different animals. And they’re animals turbocharges by recent advancements in communication and collaboration.

These continue to be exciting times.