Google has been pushing Google Apps for the Enterprise for some time and, more and more, going head-to-head against Microsoft and IBM. Security and Privacy have again gotten in Google’s way as it works to beef up revenue streams other than contextual advertising. The latest concerns have been expressed by UC Davis: 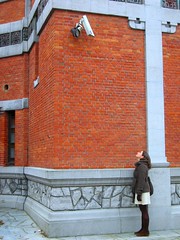 In a potential blow to Google’s efforts to establish itself as a major player in enterprise software, a leading public university has ended its evaluation of Gmail as the official e-mail program for its 30,000 faculty and staff members—and it’s got some harsh words for the search giant.
…
the note, dated April 30, also cited a recent letter to Google CEO Eric Schmidt from the privacy commissioners of ten countries, including Canada, the UK, and Germany—but not the U.S.—that chastised Google for its recent addition of Google Buzz to Gmail. Google Buzz adds social networking tools that the commissioners said compromise user privacy.

A response to the article – which should prompt an update within the article itself – folows here:

They’re only stopping the pilot for faculty and staff. The large student population will continue to use Google Apps. It says so right in the press release.

This is an interesting contrast to the recent funding Cloud Sherpas raised:

Google Apps has basically been a total win for the start-up I’ve been helping build since August ’08: basically within a week of coming aboard, I had all the collaboration tools (mail, calendar and docs) running in our own “private space.” Precisely these kinds of systems have taken me weeks or months to build atop Exchange or Lotus Notes. This without a single dollar of CapEx or person-power needed to buy or admin boxes.

The privacy issues may be of concern to some orgs, but it would be surprising if there were issues that Google and their partners like Cloud Sherpa couldn’t address. Regardless, if you’re interested in speed-to-market with very few out-of-pocket costs, and by “not letting the perfect be the enemy of the good,” there are many benefits to be had for many orgs by rolling out Google Apps over Exchange and Lotus Notes.